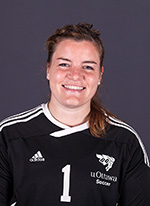 Melissa Pesant has been on the soccer fields playing at a competitive level for over 15 years. She played in the Outaouais area for several years, initially with the Hull soccer club (ASH), then AAA with FC Outaouais and then played with the Ottawa Fury. She also played with the University of Moncton for 2 years and in Albi, France in division 2. She is currently the goalkeeper for the Gee-Gees at the University of Ottawa. Last season they finished 3rd in the country! Melissa has been coaching for many years and enjoys spending time on the pitch with young players. She hopes to share her passion and engage the players in having fun while doing it.